Buying a used vehicle? Great price? STOP.
Are you sure you gain more than you lose? Check its history for hidden problems first.

Airbag deployment check: why it is so critical and how to detect airbag problems

Today it is wise to avoid any vehicle with airbag deployment in their history and the massive Takata airbag recall adds to the issue.

If the vehicle has a normal clean title that does not necessarily mean that its airbags are intact and functional. A vehicle with deployed airbags can have a clean title. Many people believe that once a vehicle is in an accident and the airbag is deployed it gets written off and you'll see a Salvage / Junk or another brand on its title incidating a severe damage. This misconception results in numerous cases when people become victims of airbag scams and drive unprotected exposing themselves and their passengers to a peril. Or even worse, the airbags do not deploy in an accident.

Read below how used car buyers are left without airbags and how to prevent the disaster. But first of all, a few lines about Takata recall that can save you not just money but even life.

One of major airbag manufacturers Takata issued a recall for 67 millin airbags installed on more than 42 million vehicles because they can deploy explosively and injure or kill. When an explosion occurs metal fractions and particles burst into the interior of the car and into people inside. Highest risk models are 2006 Ford Ranger and Mazda B-Series pickup trucks and 2001 to 2003 Acura and Honda with the so-called "alpha" airbags. Defective airbags caused 19 deaths and more than 400 injuries in the U.S alone to date.

Unfortunately, millions of these defective airbags are circulating in the aftermarket after being dismounted from totaled parts-only vehicles and junk yards and used to repair other vehicles with deployed airbags or salvage vehicles, even though Takata made an effort to withdraw these airbabgs from junk yeards. The reason why airbags explode is that ammonium-nitrate-based propellant was lacking chemical drying agent. Parts-only vehicles or dismantled airbags are sometimes kept at junk yards exposed to moisture and high temperatures which makes then potentially explosive. Even if such a replacement airbag is installed properly it puts your life at risk! That is also the reason why now some scrupulous rebuilders don't want to restore vehicles that need an airbag replacement. It is better to avoid vehicles with airbag deployment history.

In most states the law does not oblige owners and drivers to have functional airbags. In addition, inspections run by state transportation departments priror to re-titling a damaged vehicle are more focused on it being juristically clean, or, in other words, being fixed with legally obtained parts and having a genuine VIN. Even if safety checks are performed and airbag indicators are checked today that does not warrant that the airbag is functional. Even though is is mandatory that the seller disclose the information about airbag deployment or missing airbags not every seller obeys. In addition, the seller may be even unaware of the missing airbag because of the airbag fraud on the side of the car shop that fixed the vehicle.

In the example below, CARFAX shows airbag deployment in 2014 (Autocheck does the same for this vehicle) but the vehicle manufactured in 2013 preserved a clean title and both the providers offer buyback protection for this vehicle. Only deep insight helped find out that it was sold at IAAI auction in 2014 in UT with deployed airbags, which deals with totaled vehicles. In 2021 this vehicle was offered for sale with a clean title and without any indications of prior accidents, airbag deployment, salvage auction or adequate price drop. 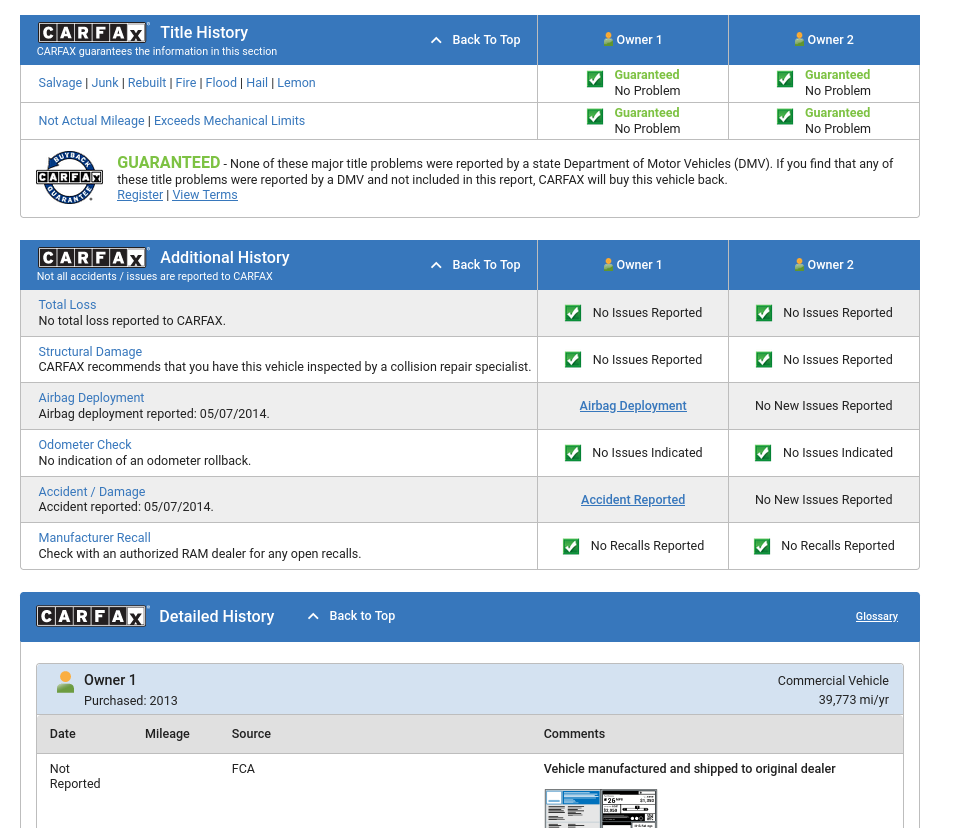 On a new vehicle resale value won't be affected much, provided that the airbags were properly recharged by a reputable mechanic and tested with airbag diagnositc tools. On an older vehicle a single airbag may result in total loss. Having first a salvage and later rebuilt title (so as the car is roadworthy again) all by itself devalues the vehicle by up to 50%. An older vehicle with a deployed airbag and no salvage title may be a concern for you as a buyer because the owner might find it more profitable to fix it at least somehow and sell.

Yes, it does and it is the easiest and cheapest way is to start if you would like to avoid any airbag issues. Get a vehicle history report and only after that hire a mechanic for a prepurchase inspection, paying close attention to airbags if the history shows there was a deployment and you still want that car. Finacial loss on extra repairs and servicing of a problem vehicle is more than just upleasant but not as much as driving without airbags, while the fact only emmerges during an accident.

How to check airbag recall?

If you have a vehicle history report by CARFAX or Autocheck, all VEHICLE MANUFACTURER recalls will be included in the report. If not, read the instruction on what steps to take at www.nhtsa.gov/equipment/takata-recall-spotlight.

It is critically important to check a vehicle for airbag recalls due to recent Takata recall for 67 million airbags!

Buying a used vehicle? Great price? STOP.
Are you sure you gain more than you lose? Check its history for hidden problems first.